The other night I was going through my house information on the computer and came across these notes I took after speaking with the previous owners on January 20, 2001:

The house was heated by oil and had a tank in basement, which one time overflowed and went all over the floor. Today, it's now forced air gas and the only thing that spills is some paint from time to time.

In 1967, they installed aluminum siding. They removed the old asbestos siding and it cost them $5000. She said that the wood siding underneath is most likely in good shape as her father was good about removing rot. Today, the exterior is the original dutch lap siding that I restored in summer of 2001. I removed that same aluminum siding that they installed 34 years before.

In 1969, the day man first walked on the moon, they put the sidewalk from the front door to the street in. Her kids did their hand prints and names (Tommy and Bobby?) just to the right of the front door as you’re facing it. They were the ones who opened up the staircase. They had the 50’s style cone shaped fireplace on the woodstove area. Today, it is.... 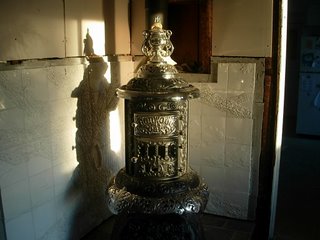 They had poured the concrete off the dining room for the patio. Today, the concrete exists but was broken up in 1999 and reinstalled with creeping thyme planted in the cracks.

The back utility room was put up by them. They also gutted and refinished the kitchen and the bathroom. There was a fire before them in the back porch area. They had dug out the basement crawl space, and they installed a roof in the early seventies but they knew someone had put the brown roof on after them. In 1997, I had to have a new roof put on. There were FOUR layers of previous roofs. The bottom being wood shingles.

There was no 6-foot fence but rather hedges all around. There was also a garage in the back. Today, it's just grass, a waterfall, and a lattice shed in the back.

Their kids used the attic above the kitchen as a play area and they put a floor in there. Today, it is a second bathroom and part of an enlarged bedroom.
Posted by Joe at Tuesday, October 17, 2006

Email ThisBlogThis!Share to TwitterShare to FacebookShare to Pinterest
Labels: history