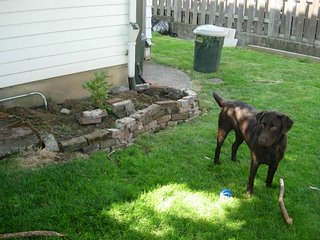 On the north part of my house, I have a little section that's always been in need of some type border to separate it from the yard. When I did the remodel of the attic, the brick chimney had to be reconstructed. Before they could get away with the old brick, I hauled it all back to my house for future use. I really like the look of old rustic brick. And having been a part of the house at one time makes it pretty cool too.

These pictures are what I got done this last Saturday by laying out what it will look like prior to mortaring it. The chocolate lab in the picture above is my super cool dog, named Scully. 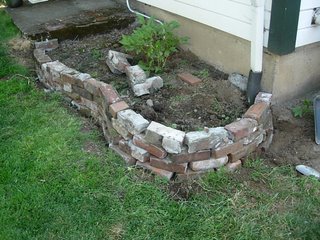 Email ThisBlogThis!Share to TwitterShare to FacebookShare to Pinterest
Labels: garden, Outside 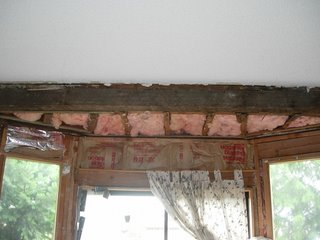 This is about the only thing that is postable for this week - my bay window / door getting stuffed with insulation. It's amazing how much insulation you can stuff into an area. Even with the smallest quantity of insulation you can buy, I was afraid I'd have all sorts of leftover insulation that I'd have to deal with but it wasn't the case here.
Posted by Joe at Monday, August 28, 2006 No comments:

While removing more of the lathes, this time with the sawzall, I accidently cut the wire from the switch to the ceiling light in the office. Duh.
I didn't think to take a picture of the actual cut wire until after I ran the new line. This is before I stapled the wire to the stud: 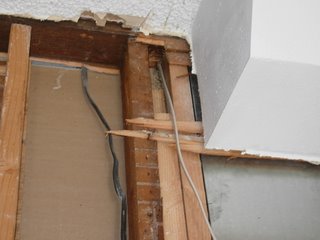 I could have sworn I had plenty of distance from the blade to the wire, but apparently the blade must fly around while in action. I still really like my sawzall though, despite the rework I had to do. I decided the easiest and most unnoticable fix was to just add a j-box to connect a new wire to the existing old, rather than rewire the entire line. I had also found a splice in the existing line which was removed with the new wiring fix. The j-box is placed on the office side also. This way it can't be seen when you walk right into the house. 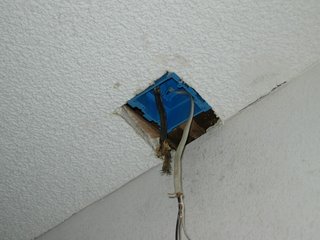 I took my time patching by doing one step each day. 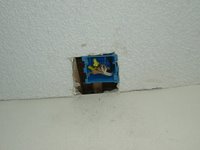 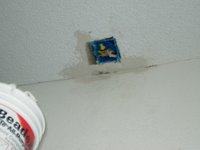 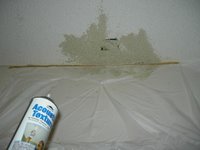 The acoustical texture (aka popcorn) spray was pretty wild. There's a very good reason why they tell you to cover EVERYTHING in the room when you use it. Remember the part in the "Exorcist" when Regan suddenly vomited all over the visiting priest? That came to mind upon triggering the texture spray.

And the final result, or at least final for now. I still need to paint the entire ceiling in the office. But later. 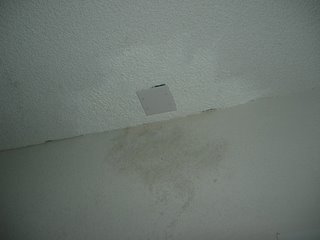 Welcome to another exciting installment of the 1900 Farmhouse blog. And what could be more exciting than installing insulation? Trying to get through this 6" opening to crawl into my porch attic might be excting: 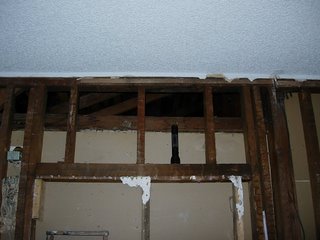 But instead, I decided to blast a hole in the entry way ceiling with my new Sawzall! Not quite the porthole to heaven, but it was the only way to get the attic. 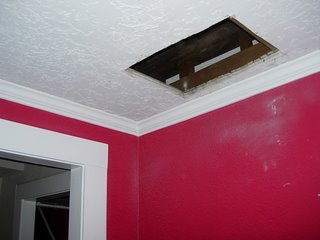 This is the before insulation: 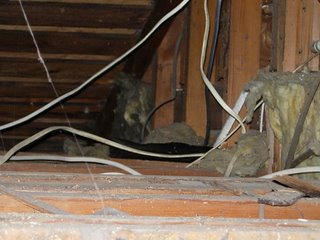 And after (I probably should have straightened out that existing wiring but I just wanted to insulate, and get out!): 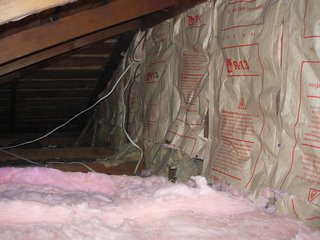 Here's a sequence of the porthole patching: 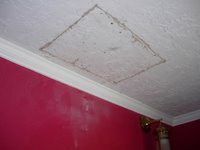 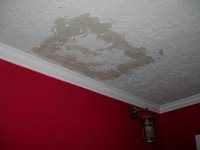 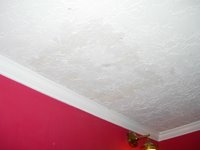 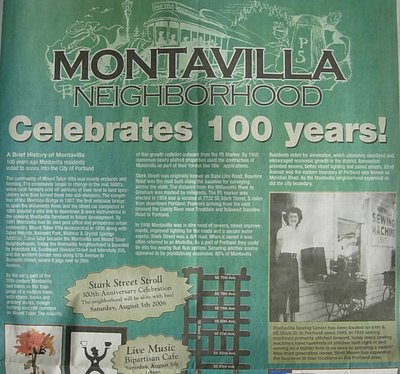 The neighborhood I live in is called Montavilla and it celebrating it's 100 year this year. I have been really surprised with all the hoopla lately in the neighborhood and especially the little business district that is 2 blocks from my house. When I first moved here 11 years ago, the business district was avoided since there was nothing worthwhile except for Flying Pie pizza and Ya Hala - huge favorites among many Portlanders. Within the last year, a theater has gone in, a very cool coffee shop, and a wine bar. Rumor has it, we're going to get a fine dining restaurant, possible a sporting goods store with a skate park, and possibly a Trader Joe's.

I really started this blog to share progress with family and friends from out of town. I haven't done much lately, except get this pile of lathes down into the basement. Whoop-ee. 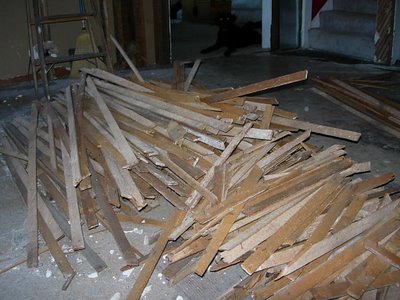